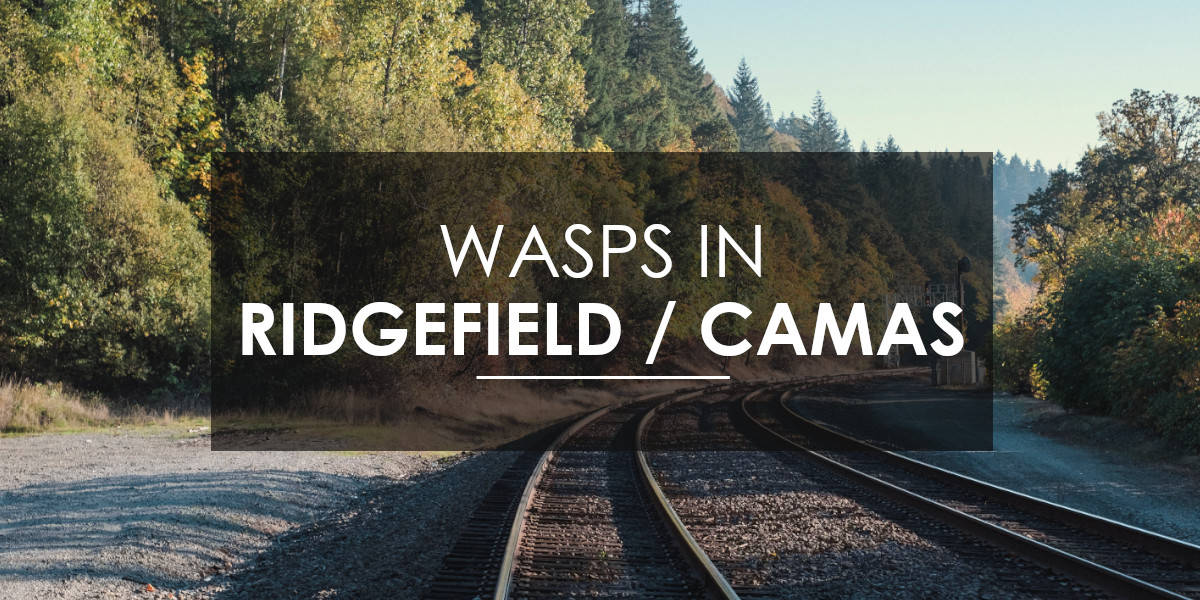 Stinging Insects in Ridgefield and Camas

The Pacific Northwest is perhaps most famous for its rain. The overcast skies, the constant drizzle, and copious amounts of warm, caffeinated beverages to combat those factors— they’re all too common clichés that bear more than a little bit of truth.

What’s less known is that once those skies become clear and dry, the Pacific Northwest becomes a virtual wonderland of flowering plants: rhododendrons, cherry and apple blossoms, magnolias, tulips, and dogwood. The once sleepy landscape is suddenly saturated with vibrant colors, sweet and herby scents, and lots and lots of airborne pollen.

And, as is the natural way, with that gorgeous flora comes a wide variety of stinging insects, such as bees, paper wasps, hornets, and yellowjackets (the latter of which aren’t known as being strong pollinators, but we’ll get to that in a sec.)

Not far behind the skies and flowers and the insects come us people, where we’re tending to our lawns and gardens, and probably starting to spend a little more time outside entertaining our friends and family. This combination of stinging insects and people spending more time outside can be a bad combination, especially if we’re enjoying sweet drinks and uncovered foods, and even more so of there are allergies involved. Here’s a rundown of everything you need to know about the most common stinging insects in Ridgefield and Camas.

Bees In Ridgefield and Camas

The cities of Ridgefield, WA and Camas, WA are two of the fastest growing cities in Washington.  Many new residents of both towns reach out to Aspen Pest Control every year for advice on how to deal with stinging insects.

As is commonly known, bees are incredibly important pollinators. In fact 80%(!) of all crops pollinated in the United States are done by these incredibly hard working insects. Because of this fact, and because the role of pollination is so essential to the success of our food supply, we try our best to be mindful of taking care of our bee population.

However, at Aspen Pest Control, our number one priority is to keep our customers safe and satisfied, so if you or a loved one are allergic to bee stings, have a hive too close to the home, or are experiencing a particularly tough infestation, we encourage you to contact us.

The histamine that a bee sting releases when stinging a person with allergies can cause them to go into anaphylactic shock, causing them swelling, irritation, and, more extreme cases, closes airways and prevents normal breathing, creating a dangerous and sometimes deadly situation.

If you or a loved one are stung by a bee, remove its stinger from the afflicted area, and in the instances of those who are allergic, follow doctor recommended instructions and treatments immediately.

As always, we use safe, environmentally friendly methods to exterminate, and hive removal comes standard with our pest control services.

Paper Wasps In Ridgefield and Camas

Though it’s less commonly known, bees are, more or less, cousins to the wasp, and both hornets and yellowjackets are actually types of wasps, and the insects we typically refer to as wasps are more specifically named paper wasps. Though the term wasp has become a generalized name for a variety of stinging insects, there are important distinctions that should be noted pertaining to their size, markings, food preferences, how they create shelters, and their level of aggression toward people.

Paper wasps are so named for the way in which they construct their nests. These resourceful creatures like to build their nests on horizontal, flat surfaces (think rafters, covered porches, eaves, and tree limbs) that are safe from weather and other external threats.

Paper wasps will mix their saliva with dead wood and plant matter to make a construction material that somewhat resembles homemade paper. This is then wrapped around the comb-shaped structure that houses the colony. At approximately .5 to 1.5 inches in length, paper wasps are pollinators, and also are consumers of smaller insects, insect larvae, and caterpillars. Their abdomen features the familiar yellow and black stripes that certain varieties of the insect is known for. (Though their size is typically quite different, smaller from that of the yellowjacket.)

Though not offensively aggressive, paper wasps will sting when they feel their colony is being threatened. Paper wasp allergies can be of concern for certain people, so take appropriate precautions should you find a paper wasp nest on your home or colony.

Hornets In Ridgefield and Camas

Hornets, again, are a type of wasp that can typically measure as much as 2 inches in some cases, and, unlike paper wasps and yellowjackets, their abdomens also feature reddish brown colorings that augment the yellow and black.  A common hornet in Ridgefield, WA is the bald faced hornet which has distinctive black and white markings.

Hornets create their nests much in the same manner as the paper wasp their colonies are comprised by a vast majority of female insects whom are entirely devoted to the protection and growth of their community and queen. Males are scant, and their only purpose is that of mating. Males commonly die shortly after breeding.

Hornets dine on other smaller wasps and insects like crickets, grasshoppers, and caterpillars. Like the paper wasp, hornets aren’t especially aggressive, but will attack when provoked.

Yellowjackets in Ridgefield and Camas

Yellowjackets, while they are wasps, are another story altogether. Their nesting habits are different than that of other wasps, they have a different diet, and they’re wildly more aggressive than bees, paper wasps, or hornets.

At approximately .5 inches in size, these yellow and black striped insects use the same means of production (saliva, wood and plant fibers) to construct their nests (which can hold as many as 4,000 yellowjackets, by the way) but instead of building them in high, flat spaces, they build them in more concealed spaces, such as abandoned rodent dens, cavities in trees, and shrubs — whatever they can do to keep them lower to the ground and safe from view.

Yellowjackets aren’t typically pollinators, and crave sweet substances, and, unusually, will even eat meat. It is highly likely that when you’re entertaining outside and you have insects crawling on your food and in your drink containers, that it’s yellowjackets you’re dealing with.

Another important factor about yellowjackets: They’re extremely aggressive, and will not wait to feel threatened before taking the offensive. Even just being in the immediate area of a yellow jacket den will cause them to go into protective mode. Steer clear of yellowjackets and don’t attempt to remove the nest yourself. If stung, apply doctor-advised treatment methods, or, in more extreme cases such as allergic reactions, contact emergency services.

Extermination Services for Paper Wasps,
Hornets, and Yellowjackets In Ridgefield and Camas

If you’re experiencing a stinging insect infestation near your home or property, take proper precautions and contact a professional. At Aspen Pest Control, we use safe, environmentally friendly methods that will ensure total elimination, and nest removal comes standard with this service. We use specialized tools for removal in order to keep your family safe, and your home damage-free.

You’ve waited all winter long to celebrate the joys of the great outdoors — you deserve to celebrate in it without the risk of stinging insects. Contact Aspen Pest Control today so your friends and family can enjoy a fun-filled, sting-free summer!

Facing a mouse infestation? We can help! Realizing that your home and property have been infested by mice can feel discouraging. Many of our clients have made the assumption that having rodents means that their homes aren’t as clean as they should be, but that...

DO contact pest control experts Mice are an incredibly common issue that homeowners face, but they can be incredibly difficult to deal with. At Aspen Pest Control, we have expertise in our ability to determine how mice are entering your home, where they’re nesting,...