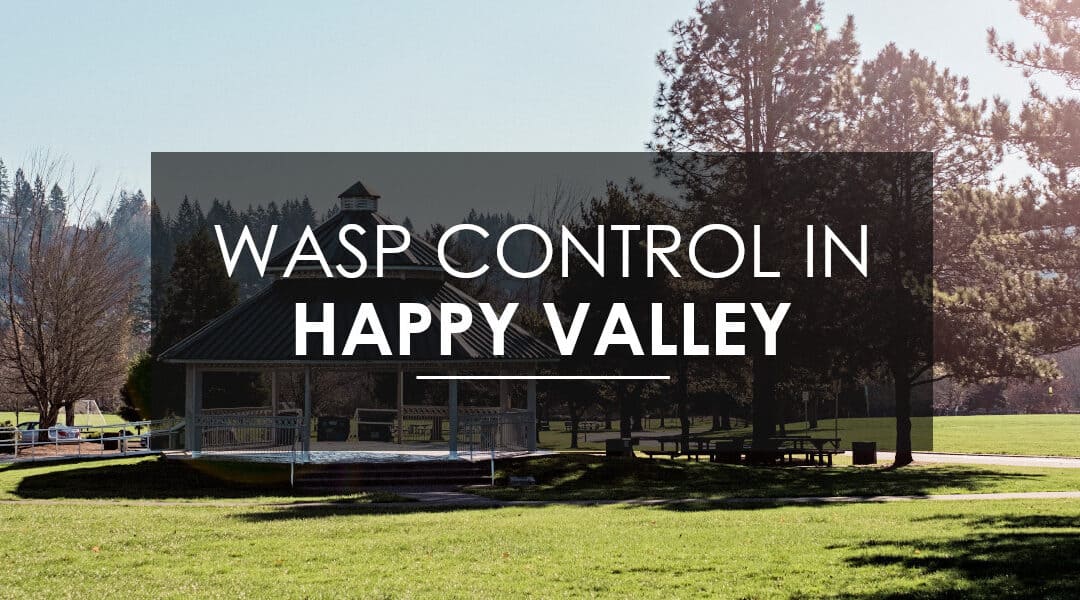 Concerned you have a problem with stinging insects around your Happy Valley home? You need to know what you’re dealing with!

Let Aspen Pest Control assist you in understanding these creatures, exterminating them, and preventing them from returning!

Stinging insects can be a real problem. They are disruptive, they make your family and guests uncomfortable, and in many cases they can be downright dangerous! So what should you do about them?

We always encourage folks, whether they’re neighbors of yours in Happy Valley, or if they’re home or business owners in the greater Portland and Southwest Washington areas, to seek professional help when it comes to assessment, extermination, and management of stinging insects like paper wasps, hornets, and yellow jackets.

Though these creatures are related, there are differences in the way they behave and the way they should be dealt with. Some are far more aggressive than others, so we want you to be safe! Let a team of stinging insect extermination experts manage this for you, so you can have one less task to manage and way more peace of mind.

Though many mistake wasps and hornets for being the same creature, they are actually two distinct stinging insects. In fact, hornets are actually a type of wasp. And what we call wasps should be more specifically referred two as paper wasps. Though there are many distinctions between these species, a portion of their diets, their size, and their coloration are what largely set them apart from one another.

Some important facts about paper wasps

Paper wasps are slightly smaller than hornets, typically measuring up to about one-inch in length. If you have the opportunity to (safely) look closely at a paper wasp, we encourage you to do so. You might be surprised.

Their coloring isn’t usually the typical black and yellow you might expect. Paper wasps are more likely to be brown and yellow in color, with alternating stripes across their abdomen and markings of the same hues found all over their heads and thoraxes.

They eat a variety of different foods, including certain proteins, small insects, as well as the pollen and nectar from flowering plants.

Some important facts about hornets.

Hornets are just a little bit different from paper wasps, starting with their size. At full maturity, a hornet can measure in length at about one-and-a-half inches. Their markings are similar to that of the paper wasp, but the coloring you’ll see on hornets are pretty different.

It’s not uncommon to see hornets in any combination of yellow, a reddish brown, black, and sometimes even white. These colors will display in the same sort of alternating stripes on the insect’s abdomen with the same colors found on their head and thorax.

Unlike paper wasps, hornets are not pollinators and are not looking for sweet nectar or pollen for nourishment, instead, they prefer to eat larvae, small insects, and similar nuisance pests.

The colonies of paper wasps and hornets

The hierarchy of their colonies are also very similar. The colonies of paper wasps will consist of queens, workers, males, and, of course, larvae. Queens have a singular, important responsibility: To lay eggs and grow the colony. Queens have a huge influence on the colony and use their pheromones to help direct the behavior of the workers and others in the nest.

Males also have a single responsibility, but have much less control and influence over the colony. They are also far fewer in number than workers. The only thing that the males are needed for is mating with the queen. Once they’ve done that, they will shortly thereafter die.

Workers, on the other hand, have a much broader set of responsibilities than either the males or the queen. Workers scout for where the nest should be built, construct it, maintain it, and they protect it! They are also responsible for gathering and distributing food throughout the colony.

How paper wasps and hornets build their nests

Though both of these species build their nests in largely the same way, it is the paper wasp who, by its name, could be more closely associated with this style of nest. You see, these insects create their homes in the most fascinating way. Once they’ve found the right area out of harm’s way to build their nests — usually on spaces like vertical tree limbs, on the eaves of a home, under decking or even on plumbing — they will combine their saliva with plant matter, dead, dried wood, and other similar organic materials in order to create a substance that is almost like papier mache when it dries.

Are paper wasps and hornets harmful?

In a word: Yes. Even though paper wasps and hornets are not as aggressive as yellow jackets, they still pose a potential threat to you, your loved ones, and any visitors who might unknowingly be considered a threat to the colony by the hornets or wasps.

So what should you do? Aspen Pest Control recommends you seek professional assistance in the assessment, extermination, nest removal, and ongoing management of your paper wasp or hornet issue.

It’s more than a matter of just getting rid of the pests. You need a trusted team of expert pest control specialists to help you understand the breadth of your infestation, make recommendations that complement your budget and lifestyle, and, if you choose to move forward with treatment, strive to not only exterminate for today, but prevent for tomorrow and beyond.

Some important facts about yellow jackets.

Yellow jackets can be very, very aggressive. In fact, compared to the temperaments of either the hornet or the paper wasps, the yellow jacket is without question the most aggressive of this trio of stinging insects.

Unlike either the paper wasp or the hornet, it is not usual for yellow jackets to be aggressors, regardless of whether or not you’ve gotten too near or have threatened the colony. They will make it clear that you should stay very far away. What’s more, they do not lose their stingers and can therefore sting repeatedly, causing even greater harm to whomever or whatever they have chosen to sting.

In terms of their size, shape, and overall appearance, the yellow jacket is distinct in its look via its long and smooth body, usually measuring about one-half to one-inch in length. Similar to paper wasps and hornets, they are covered in the distinctive markings and stripes, usually in a combination of black and yellow.

I think I have yellow jackets but can’t find them. Where do they build their nests?

Though they build their nests in a very similar fashion to hornets and paper wasps, where they build them is far more unusual. As we’ve mentioned, the yellow jacket is exceptionally protective of its colony, so much so that instead of building their nests on trees branches or the eaves of homes, they will actually go to great lengths in order to hide their nests, building them in hollow trees, deep in bushes, and even in abandoned animal dens underground. These nests can be as big as a basketball, sometimes housing four thousand yellow jackets. YIKES!

Though their diets are also similar, their larvae do have a particular taste for meat, so when you’re having trouble with a stinging insect near exposed trash or compost bins or during outdoor cookouts, you’re likely dealing with a yellow jacket, so be careful!

We can’t make it clear enough, do not attempt to exterminate yellow jackets on your own. With up to four thousand angry stingers to potentially deal with, you really need a team of professionals to locate and exterminate these pests! Nest removal is key, as is the ongoing maintenance of the areas most susceptible to infestation. Trusted exterminators, like those at Aspen Pest Control, have the training, equipment, and experience to get the job done right. It’s what you deserve!

Are you concerned about a stinging insect infestation?
Call Aspen Pest Control today for your free quote!