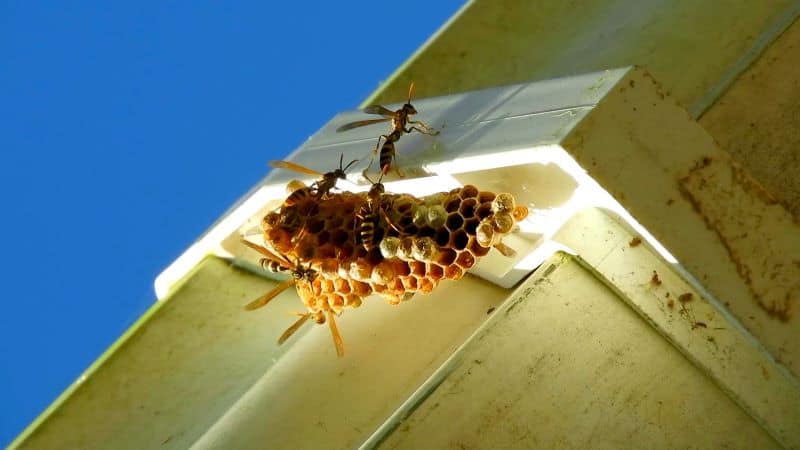 When the weather gets warmer in the Pacific Northwest, we all clamor outside so we can enjoy the blooms of spring and the fruits of summer. The thing is, we’re not alone! Nuisance pests like wasps, hornets, and yellow jackets become prominent during these sunnier months, increasing your risk of stings or worse. So, how do you deal with them?

What many don’t know is that these creatures are all distinctly different from each other. Folks will use their names interchangeably, but they’re quite different and must be dealt with differently, as well.

Our goal as pest control specialists is to help you understand the nuances between these creatures and help you dispose of them and their nests safely so you can move on with your life in a pest-free environment!

Let’s take a closer look at each type of pest, starting with what many consider to be the most aggressive and potentially harmful, the yellow jacket.

Simply being too close to their nest can lead to unexpected aggression, including repeated stinging. In contrast to bees, for instance, who can only sting a single time, yellow jackets can sting repeatedly, causing even more harm to those on the receiving end of their barbs.

Yellow jackets have a very distinct appearance. Their bodies, approximately one-half to one-inch long, are slender and smooth, and have yellow and black markings akin to that of a bee, with alternating stripes covering much of their bodies.

Another very different thing about the yellow jacket is their manner of nest building. As we mentioned, they can be outwardly aggressive when it comes to protecting their colonies, so it should come as no surprise that they’re very careful about where they choose to build their nests. You won’t typically see them in the eaves of homes, under covered porch roofs or patios. In fact, you won’t typically see them at all because they prefer ready made spaces like animal dens that have been abandoned, hollow trees or fallen logs, or in very deep bushes. These nests can sometimes be as big as a basketball, which makes sense in that they can house up to four thousand of the stinging insects! That’s a lot of stinging!!!

Let’s take a closer look inside these basketball-sized nests. Inside, you’ll find an egg-laying queen, her larvae, males, whose sole purpose is to mate with the queen (they’ll die after fulfilling their duty), and workers, who build, maintain, and protect the nest as well as gather food.

Their preferred nourishment? They love sweets, and are even known to consume meat. If you’ve ever seen black and yellow insects swarming trash cans or bothering people at outdoor cookouts, it’s often going to be these pests.

So, you might be wondering, how do you get rid of yellow jackets? The answer is very, very carefully. We highly recommend that professionals assist you in exterminating your yellow jacket infestation, due to their aggressive nature and the high potential for you and your loved ones to be stung repeatedly.

Our team is not only licensed and insured, but we’re also deeply trained and vastly experienced in exterminating yellow jackets from residential and commercial spaces.

Think you might have wasps or hornets instead of yellow jackets? We can help with those, too.

We know a lot of folks who grew up with the understanding that wasps and hornets are the same, when in fact hornets can be described as a type of wasp. Most of the wasps you’ll see in the Battle Ground area are called paper wasps, and their appearance, their size, and certain aspects of their diets are actually quite different from hornets. Let’s learn more.

Wasps are usually smaller than hornets, often measuring up to an inch in length. Their colors include brown, black, and yellow, with alternating stripes on their abdomens. Wasps will sometimes consume proteins, including those from smaller insects, as well as feed on nectar and pollen from flowering plants.

Hornets, the larger of the two creatures, can measure up to one-and-a-half inches. Their colors are slightly more diverse than the wasps, including not only yellow and black, but also brown, reddish brown, and even white. They also will consume other smaller insects and types of larvae, but aren’t known to consume pollen and nectar.

The nests of wasps and hornets are very similar to one another, and like yellow jackets and many other social insects, consist of the same queen, worker, and male hierarchy. The impressive thing about these nests is how they’re created. Workers will take organic materials, usually plant matter or dead, dried wood, and combine it with their saliva, creating a building material that is very paper-like when it dries.

Their nests are built in areas with the intent of protecting themselves from predators, but are usually easier to find than yellow jackets’. You’ll commonly find their nests in higher up spaces like eaves, under patio roofs, attached to overhead piping, high tree limbs, or on the underside of overhead decking.

These creatures usually aren’t the aggressors, but let us be clear, they are aggressive. If they feel threatened, they will attack and try to sting you.

If you see nests on your home or around your property, it’s incredibly important to call for professional attention in having their nests removed. As a standard part of our service, we not only treat your nuisance pests, but we also will remove the nests.

Ready to finally rid your home of stinging insects? Call Aspen Pest Control TODAY. We have the equipment, expertise, and experience to help you live a life free of yellow jackets, wasps, and hornets. Call today!